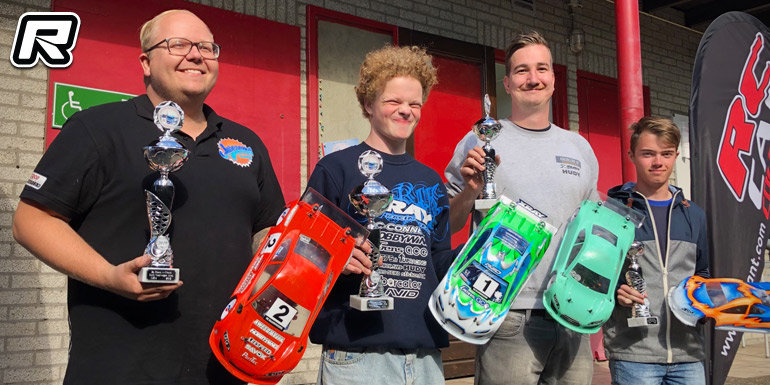 The fourth round of the Dutch Electric On-road Nationals was held at the fast and flowing track of the MAC De Baanbrekers club in Rucphen. Saturday was open for free practice, and it was clear right from the start that the race would be a battle between the Awesomatix cars of current championship leader Sidney Blokker, Thomas Buijze and Govert Verbeke and the Xrays of Rick Van den Akker and Florian Joos. Probably thanks to the IFMAR 2020 Worlds, that will be held at MACH Heemstede, the Touring Modified class saw a healthy 14-cars entry. As he is not a regular Dutch nationals participant, Florian Joos had to start in the first of the groups while the title protagonists were seeded in the second and faster group.

At the Dutch nationals, the spec tyre is the Rush 36. It is a bit faster than the more common Volante 36 but wears a lot more, especially on the high grip track of MAC De Baanbrekers. During the first round of qualifications, both Sidney Blokker and Florian Joos improved the current track record, with Florian setting a slightly faster 13.950 compared to Sindey’s 13.960. Florian managed also to grab the first TQ, just a second faster than Sidney. Govert, Rick and Eddie Rombouts (Xray) completed the top 5. Sidney watched Florian take the fastest time of his group, but on second run tyres, his overall time was six seconds slower. Sidney knew he had to push to grab the second qualifier, and he dully did so, 0.5s faster than Florian over five minutes. Rick took the P3 slot in front of Govert and a very strong Dyon Meinema (ARC). Q3 would decide the overall ranking. After a spring and bumpsteer adjustment and also a different tyre preparation, Florian’s car was again on rails as he managed to TQ the last round by two seconds from Sidney. Sidney struggled a bit more on third run tyres then Florian. Govert, Rick and Eddie Rombouts concluded the top 5.

The start order would be, Florian Joos (Xray), Sidney Blokker (Awesomatix), Govert Verbeke (Awesomatix), Rick Van den Akker (Xray/Zero Tribe), Eddie Rombouts (Xray). Perhaps the most clever driver of the finals was Rick Van den Akker. He knew that on sheer pace, it would be difficult to beat the three cars in front of him. He checked his laptimes and the times of the drivers behind him and decided to take a huge gamble. Instead of bolting a new set of tyres on his car, he decided to use his qualification tyres for the first final. As Florian’s mechanic decided that he could not do a warmup lap, the youngster’s car was very tricky to drive during the opening three laps. Sidney took full advantage and overtook Florian with a great manoeuvre, only to be passed again in the next corner. The two leaders fought hard and started to pull clear of the field. Rick was holding on to his P4 and made a bit of a queue behind him. The race for the front raged on, while Govert fell victim of a lapped driver and had to withdraw his car. Unfortunately mayhem would strike again. Florian had lost the lead, but squeezed the nose of his car on the inside of Sidney on the full throttle start/finish straight. Sidney went for the ideal line and both cars crashed hard. A marshall tried to sort the cars out but was hit hard by Dyon Meinema who totalled his car. The outcome of this spectacular final was Sidney in P1, followed by Florian, Rick, Robin Maas, who came from P7 and Eddi Rombouts.

A2 proved to be as exciting. Florian took the holeshot while Sidney had a bad moment at the start. This allowed Govert to pass him and take P2. Unfortunately for Govert, his car was still a bit tweaked after the crash and his car ended up in the grass the lap afterwards. This promoted Rick into P3 and he started to fully exploit his new tyres. Lapping some 0.2 per lap faster than the cars in front of him, he started to challenge Sidney for P2. This gave Florian some breathing room as the Xray driver decided to take it a bit calmer in order to save his tyres. Rick was however the man in form and he managed to pass Sidney. On the penultimate lap, Sidney made an error and fell back into Govert’s claws, but he managed to hold on to his P3 position. Rick and Florian were the only two drivers who made the extra lap. One of the backmarkers thought the race was over and remained in the middle of the track while Florian and Rick were still going full throttle. The backmarker collided with Florian’s car, but he only lost 1.5 seconds and didn’t have to be marshalled. Rick gave it all but he finished just 0.1 of a second behind Florian. A2 went to Florian, followed by Rick, Sidney, Govert and again a strong Dyon.

A3 would prove to be another spectacular race. Before the start, Florian’s mechanic shorted his speed controller. The smell of burned electronics was obvious for all the drivers on the drivers stand. Fortunately for Florian, he uses the new Hobbywing ESC and only the capacitor melted. The mechanic switched the battery around and Florian took his position on the grid. At the start, Govert again had a small mishap and Rick benefited from his problem. Rick set off to challenge Sidney for P2. What ensued was a lap after lap battle for P2. Rick clearly exploited his new rubber to the maximum and he managed to squeeze the nose of his Xray in the tiniest of gaps Sidney left. Sidney fought back hard and retook his position time after time again. On lap 17, both cars hit each other a bit too hard and Sidney had to be marshalled. Sidney was a bit gutted and he was passed as well by Govert. Florian took a popular victory and reported afterwards that his speedo still worked perfectly. The A3 ranking was Florian, Rick, Govert, Sidney and Eddie Rombouts and that would create the final ranking of Florian Joos (Xray), Sidney Blokker (Awesomatix), Rick Van den Akker (Xray/Zero Tribe), Govert Verbeke (Awesomatix), and Eddie Rombouts (Xray).

Thanks to David Joos for the report.